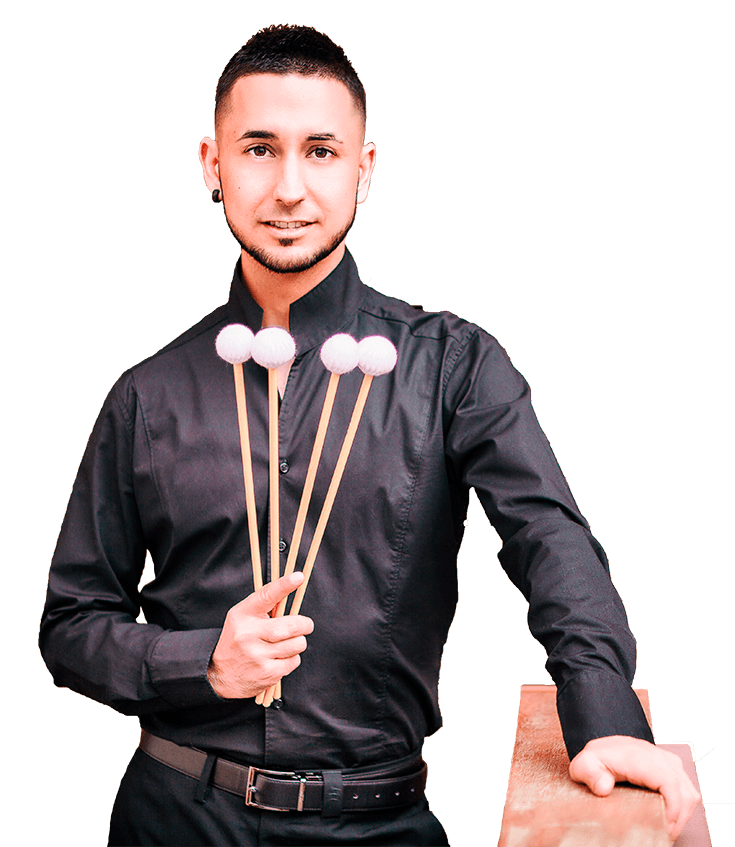 The marimba soloist Conrado Moya is one of the most relevant interpreters of the instrument in the world today. He has been acclaimed for his extraordinary technique and expressive power, and well as for his total commitment on stage.

Conrado Moya has performed as a marimba soloist all over the world in solo recitals, and as a soloist with symphony orchestras, bands and choirs. Likewise, he has been a frequent participant in significant events, such as PASIC (Percussive Arts Society International Convention) in Indianapolis, the Guatemala International Marimba Festival, the Chiapas International Festival for Marimba Players, the International Mercedes-Benz Music Festival in Shanghai and the Fair Saturday solidarity movement, among others. In the field of chamber music, he has performed with ensembles such as the Li Biao Percussion Group and Marimba Quartett. All these commitments have led to performances in important concert halls in Europe, Asia and America, including the Stuttgart Liederhalle, the Teatro Colón in Buenos Aires, the Teatro Julio Mario Santo Domingo in Bogotá, the Sala São Paulo in Brazil, the Oriental Art Center in Shanghai and the National Center for the Performing Arts in Beijing, among others.

Among his recent and forthcoming symphonic projects stand out his concerts with the Bilbao Orkestra Sinfonikoa under the baton of Unai Urrecho, Orquesta Ciudad de Almería and Michael Thomas at the Spanish Music Festival in Cádiz, Orquesta Filarmónica de Gran Canaria and Guillermo García Calvo, as well as his three world premieres during the current season: Visit Spain!, written and dedicated by José Luis Greco together with the Bilbao Sinfonietta at the Sociedad Filarmónica de Bilbao; Tres Quadres per a Marimba, written and dedicated by Albert Guinovart, with the Banda Municipal de Barcelona at L’Auditori; and El Jardín de Baco, by Lorenzo Palomo, with a double performance during the concert season of the Orquesta de Extremadura. Also noteworthy is his performance with ADDA Simfònica and Josep Vicent, bringing for the first time in the composer’s homeland the Concierto Heroico by Joaquín Rodrigo, transcribed by Conrado Moya himself and exclusively authorized to the artist by the composer’s heirs.

His chamber music activity includes several tours with Katarzyn Myćka in Germany, Spain and Japan performing one of the most demanding projects for a marimba duo, the Goldberg Variationsby J. S. Bach; in addition to various solo recitals and master classes in Spain, Germany, Switzerland, Colombia or Mexico.

Conrado Moya studied music at the conservatoire in Alicante (Spain), his hometown. While attending classes there, he also received tuition from the soloists Sisco Aparici in Valencia and Katarzyna Myćka in Stuttgart. Later, Moya continued his studies in the Hanns Eisler Hochschule für Musik in Berlin, under the guidance of the soloist Li Biao. By that time, he had already gained recognition with awards such as First Prize at the University of Cordoba’s International Marimba Competition, the Honorary Award of the Alicante Concert Society’s Musical Interpretation Competition, and the Musical Interpretation Scholarship awarded by the association Pro-Música Amadeo L. Sala, which mentioned his outstanding musical qualities and his work and commitment to the future of his instrument.

Conrado Moya is firmly committed to the development of the marimba and to extending the public’s awareness of the instrument. To this end, he has worked intensively in the creation of a new repertoire for marimba together with composers from all over the world ―with special attention to those from your country― such as Ferran Cruixent, José Luis Greco, Albert Guinovart, Christos Hatzis, Anna Ignatowicz-Glińska, Arkadiusz Kątny, Tomás Marco and Lorenzo Palomo. He has also worked on transcribing and reinterpreting ―through the sound of the marimba― great classical works ranging from J. S. Bach to Joaquín Rodrigo. One of the fruits of all this work was Silentium, his first marimba solo album, followed by Marimba Synergy, his latest album with Bach’s Goldberg Variations in a duo with Katarzyna Myćka for Mons Records.

Simultaneously with his creative work, Moya is involved in extensive educational work and is regularly invited to teach in academies and Master Classes in Spain, Germany, Luxembourg, Canada, Colombia, Mexico, the USA or Japan, among others, and to sit on juries in international competitions. He is currently marimba professor at the Escuela Superior de Música de Alto Rendimiento (ESMAR) in València, Spain.

Conrado Moya is endorsed by the American marimba maker Marimba One, with whom he has developed his very own marimba mallet series.

This website uses cookies to improve your experience while you navigate through the website. Out of these, the cookies that are categorized as necessary are stored on your browser as they are essential for the working of basic functionalities of the website. We also use third-party cookies that help us analyze and understand how you use this website. These cookies will be stored in your browser only with your consent. You also have the option to opt-out of these cookies. But opting out of some of these cookies may affect your browsing experience.
Necessary Always Enabled
Necessary cookies are absolutely essential for the website to function properly. These cookies ensure basic functionalities and security features of the website, anonymously.
Functional
Functional cookies help to perform certain functionalities like sharing the content of the website on social media platforms, collect feedbacks, and other third-party features.
Analytics
Analytical cookies are used to understand how visitors interact with the website. These cookies help provide information on metrics the number of visitors, bounce rate, traffic source, etc.
Advertisement
Advertisement cookies are used to provide visitors with relevant ads and marketing campaigns. These cookies track visitors across websites and collect information to provide customized ads.
Others
Other uncategorized cookies are those that are being analyzed and have not been classified into a category as yet.
Performance
Performance cookies are used to understand and analyze the key performance indexes of the website which helps in delivering a better user experience for the visitors.
SAVE & ACCEPT
X